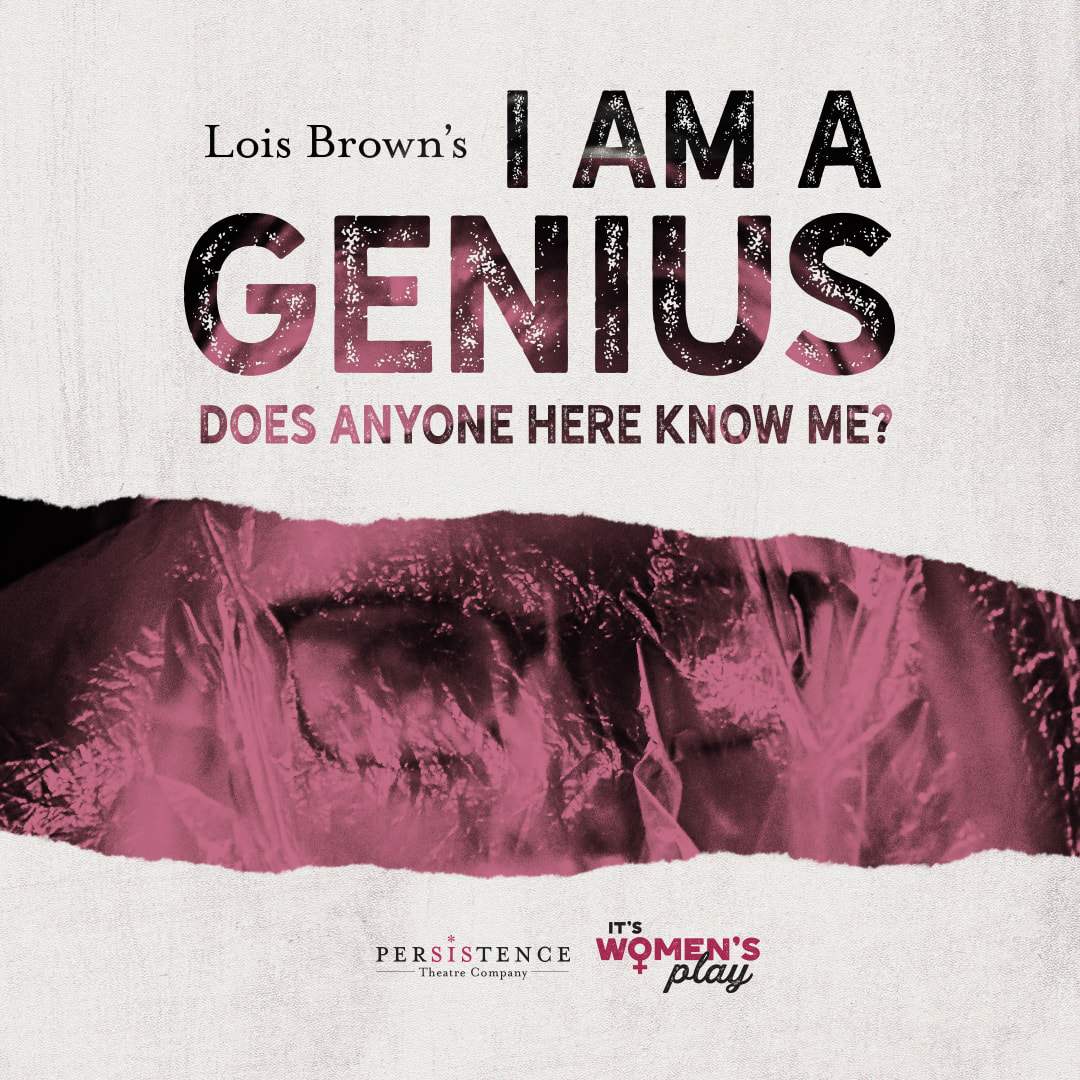 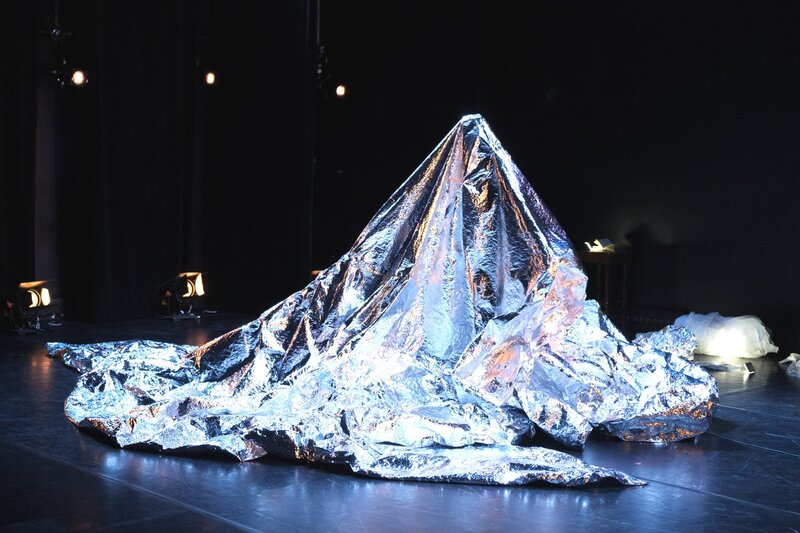 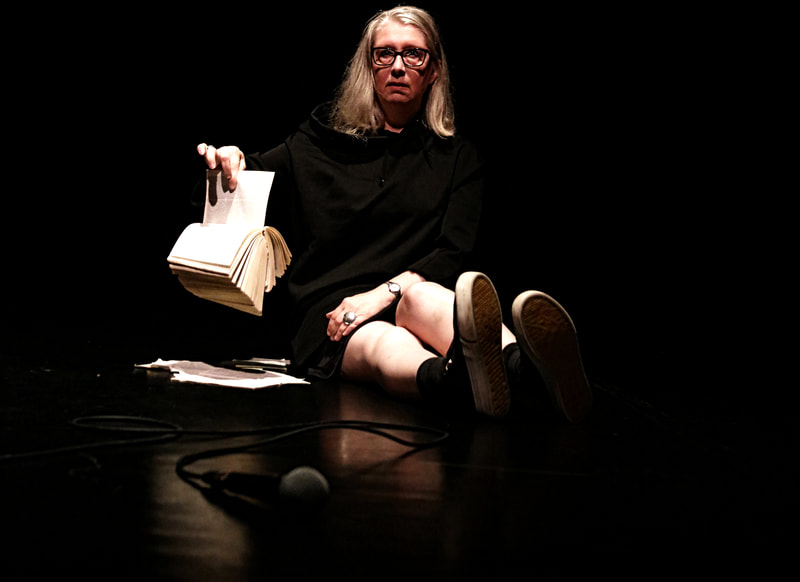 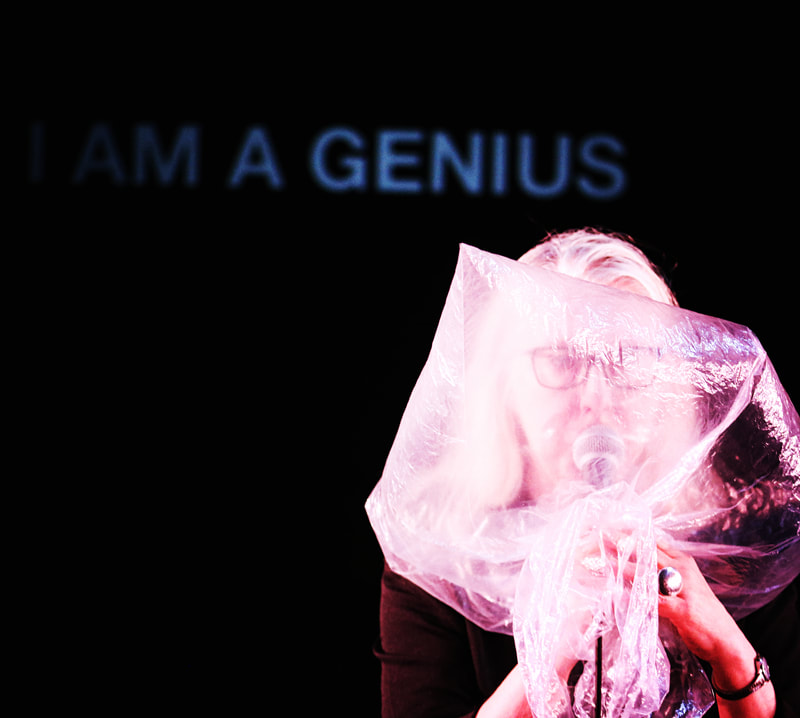 I AM A GENIUS DOES ANYONE HERE KNOW ME? by Lois Brown

I inherited a dictionary from my father after he died. It was outdated. I didn't really want it. I brought it into the studio and I flipped through it, shook it, flung it, without letting go. I picked up a microphone and amplified my investigation. The covers came off. More pages flew out and fluttered to the floor. That was the way my father had died: meaning, ripped away. I witnessed the progression of his dementia, protesting - as if death was a problem that could be solved.
​
In I AM A GENIUS... the audience encounters experiences like the one I just described. As I improvise with a 30-ft piece of paper, the plastic bag I carry it in, my Dad's old dictionary, and in the final section, 30 square ft of foil; together, the audience and I struggle with impatience, boredom, and control until the distinction between animate and inanimate become irrelevant. Then, together, we discover an energetic relationality between ourselves, paper, plastic and foil that political theorist Jane Bennett calls "thing power." Impatience, boredom and a desire to dominate are replaced with curiosity and joy.

Over the course of the performance, Montréal-based composer James O'Callaghan and I create an improvised work that engages with the strange sensuality and sonically intense worlds of paper, plastic bags, and foil, trying ultimately to manifest a "fugitive dimension of experience": the genius of everything, where curiosity eases grief and pain, and we are somehow less alone.

As my father was developing dementia, I developed chronic pain. In fact, I AM A GENIUS... offers audience interventions constructed around chronic-pain management strategies. I invite audiences to stand, to move, to catch little ticker-tape messages as they float down... to notice each other, to get comfortable, or to acknowledge they cannot get comfortable, Negotiating this other physical pain weaves through the work.
Lois Brown - Playwright and Performer 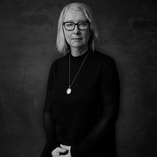 Lois Brown was educated in Drama at The University of Alberta. She returned to St. John’s, Newfoundland where she established her cross-disciplinary artistic practice, including theatre, dance and film. She is original member and past Curator of Neighbourhood Dance Works and past Artistic Animateur of RCA Theatre Company. In 2004, she was one of five Canadian directors short-listed for the Elinore & Lou Siminovitch Prize. The following year The Canada Council for the Arts gave her The Victor Martyn Lynch-Staunton Award for outstanding achievement in theatre by a mid-career Canadian artist. She was awarded the YWCA’s Women of Distinction Goodwill Award for contribution to the local, national or international commnity.  And in 2019, she was inducted into DCD’s Encore! Dance Hall of Fame. Lois holds a Masters from Memorial University, where she has taught acting and directing. She has worked with performers as diverse as Andy Jones, Alison Woolridge, Ruth Lawrence, Marthe Bernard, Mark O’Brien and Rick Mercer.