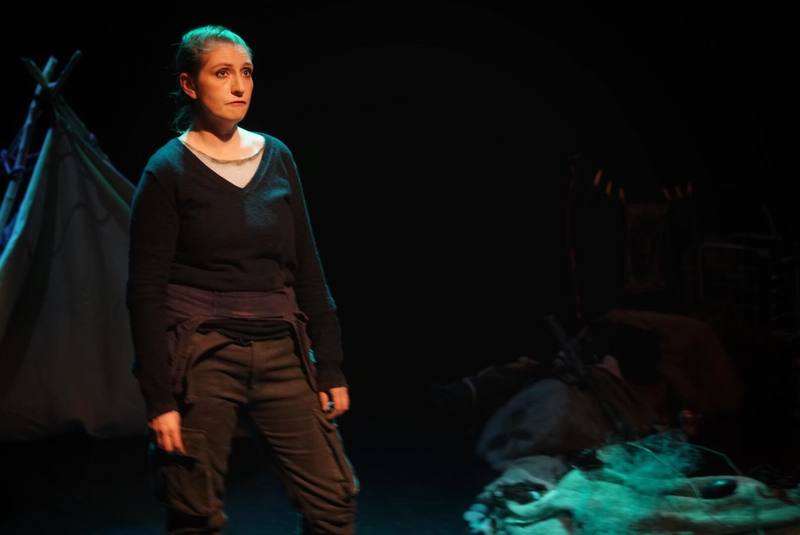 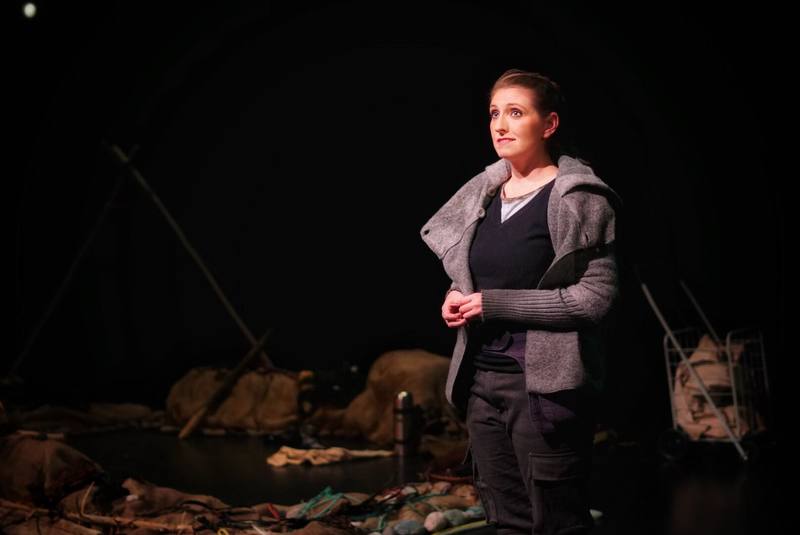 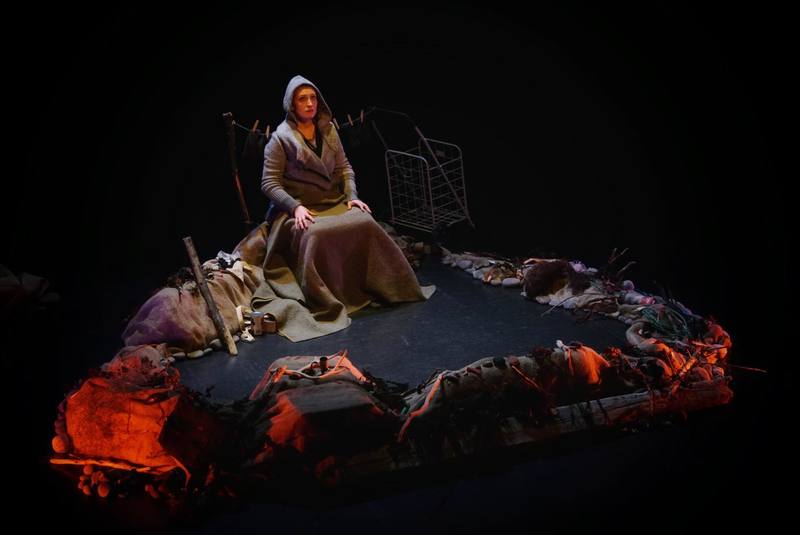 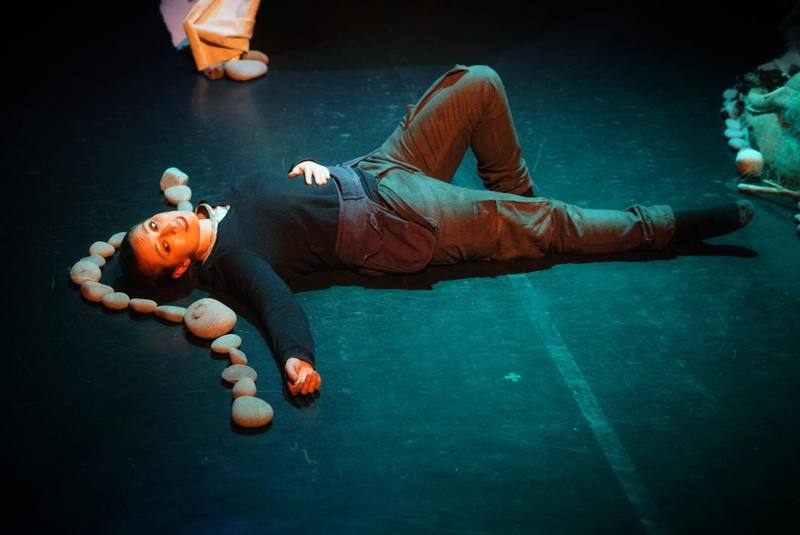 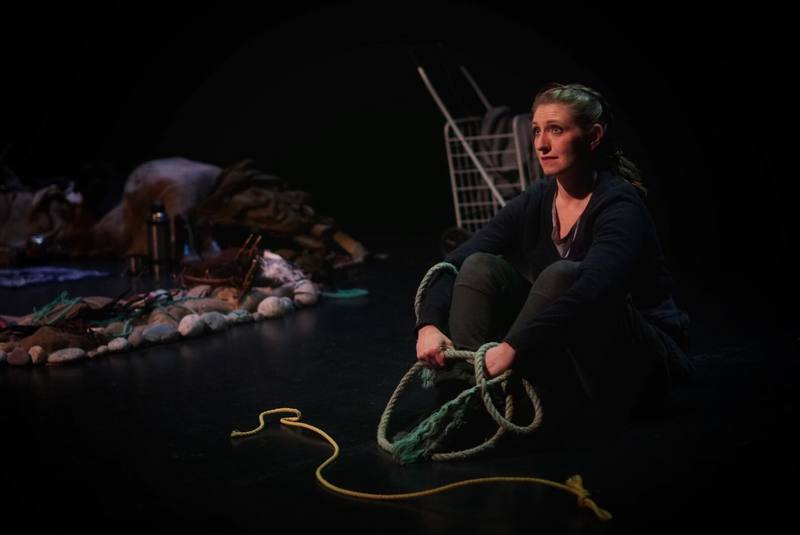 Eve wants justice for herself, for humanity and for women in the face of a God that set her up to fail and then abandoned her.

Pandora wants to protect the world from the secret evil she carries with her everywhere.

Embla wants the end of the world and a new beginning – one that, this time, doesn't include her.

The three “original women” -- Eve, Embla, and Pandora -- continue to wander the earth long after their stories were first told.

As the play opens, they meet in Paris in the early 1400s, while Joan of Arc leads French armies to victory over the English. Introducing themselves, they tell their stories. These stories include not just the three women’s original myths, but other historic events they witness and participate in, from the destruction of Pompei to the French Revolution.

Pandora begins to suspect that Embla wants to take her clay pot and open it, unleashing a final horror upon the world.

After losing touch with each other for centuries, the three women reunite in Washington, DC, for the Women’s March after Donald Trump’s election.

Amid the turmoil of hundreds of thousands of women protesting and marching for justice, Embla finally gets hold of Pandora’s clay pot and they find out what’s been inside all along.

​Performed as a one-woman show by its writer Sharon King-Campbell, Original explores what being a woman means and has meant throughout Western Civilization, from creation to right now.

Please be advised, this production contains description of rape.

Emily Austin is a theatre artist who works in several different areas of the theatre from set design, scenic painting, and carpentry, to technical direction and production management. Emily holds a BFA in Technical Theatre Production from Grenfell Campus. Her recent works include Men of Misfortune (Resource Centre for the Arts), Between Breaths (Artistic Fraud), Once (Theatre St. John’s) and Isle of Demons (PerSIStence Theatre). Emily has been working with PerSIStence Theatre since their very first show and is excited to be back working alongside fantastic women for another season.

Kathryn Burke is an actor, musician, producer and sound designer living and working in St. John’s. Originally from Ontario, she prefers the term NBC – Newfoundlander By Choice.  She has been an actor with Grand Bank Regional Theatre Festival, QVRRDF Fall Musicals, St. John’s Players, and Shakespeare by the Sea. She is also on the board of V-Day St. John’s, which produces the Vagina Monologues each year. Sound design credits include The Tempest (SBTS), Wit (SJP) and Noises Off (Nothing on Productions). This is her first show with PerSIStence Theatre Company and is so pleased to be part of such a powerful, supportive and amazingly creative group.

Diana is a multi-instrumentalist, performer, designer, storyteller and songwriter. Originally from St.John's, Newfoundland she has spent the last ten years living and working in BC, Montreal and Nunavik. She is the administrator for DanceNL and the Festival Coordinator for St.John's International CircusFest. A lover of story through song, image, dance and spectacle, Diana has a keen interest in printmaking and Ethnomusicology. Favourite projects that she has created include: The Fogo Island Song Share, the Lhasa de Sela Youth Stage for the Montreal Folk Festival, her EP "When Women Kill", being the "Femme d'Orchestre" for the puppet show Kate Crackerberry and all of the musical experiences with her students in Puvirnituq and Kangirsuk. Diana is one third of the Daly Family Collective where she gets to tell stories about her extraordinary family with her dear friends, Louise Moyes and Anne Troake in the stage show If A Place Could Be Made. She is delighted to work on ORIGINAL with these wonderful folks.

A freelance theatre artist who has worked in St. John’s since the early 90’s, Jenn is a founder and currently the producing artistic director of the PerSIStence Theatre Company. As artistic director with the Shakespeare by the Sea Festival from 1995-2015, she directed many of its productions over the years. Recent directing projects include Life Sucks (Deon-Walsh Productions), an excerpt from After The Sirens (Quills on the Edge/St. John's Shorts), and Isle of Demons (PerSIStence). As a performer, Jenn most recently appeared as Mrs. Dunphy in Brazil Square (Girl Power). She was a recipient of a Queen's Diamond Jubilee Medal for her community involvement, and earlier this year Jenn received the 2018 Woman of Distinction Award for Arts & Culture from the YWCA St. John's. More at jenndeon.ca.

​Sharon King-Campbell is an actor, playwright, storyteller and director. Recent performances in St. John's include Women Playing Hamlet (PerSIStence Theatre), Brazil Square (Girl Power), Jesus Christ Superstar (TaDa!), Billy Elliot (Atlantic Light Theatre), Richard III (Shakespeare by the Sea), and Fuddy Meers (Best Kind Productions). Sharon is a regular teller with the St. John's Storytelling Festival. Her previous plays, Fighting Fire with Snow (World's End Theatre Company) and Give Me Back (skc originals/For the Love of Learning), both enjoyed multiple remounts, and Give Me Back toured the province in partnership with the Arts & Culture Centres in 2016. Sharon was the 2017 recipient of the Rhonda Payne Award. More at sharonkingcampbell.com.

​A graduate of the CNA Textile Studies Program at the Anna Templeton Centre in St. John's, Melanie has worked on several productions with such theatre companies as White Rooster Theatre, Theatre St. John’s and PerSIStence. In addition to costume design, Melanie is also working on a collection of tales based on life in a vibrant little city on the edge of the world. After much adventure and some living away, for the moment she lives in her native St. John's with her family.

Berni Stapleton is a Newfoundland- Labrador writer and performer of unique distinction. Her play The Pope and Princess Di was just listed on the Playwrights Guild of Canada Sure Fire List of top 23 plays from
female playwrights in Canada, and her play Woman in a Monkey Cage was also long-listed. Berni has been a playwright-in-residence with companies across Canada, and her plays are regularly produced
nationally and internationally, including Offensive To Some, Brazil Square, The Haunting of Margaret Duley and Our Frances. Other accolades include The Rhonda Payne award from Arts NL; the Writer’s Association of NL award for best work in non-fiction for her contribution to the book They Let Down Baskets; and the Ambassador of Tourism award from Hospitality NL. Recently, Berni received the 2018 Arts and Letters award for best dramatic script, and was supported by the Canada Council to write her book Girly Muckle and the Queer Hands. Her new one woman show is called Late Lesbians and Other Bloomers, and Berni is one of the featured performers in Artistic Fraud’s Between Breaths. Berni was the Artistic Director of the Grand Bank Regional Theatre Festival for 11 years, and was dramaturge for and helped devise transVersing (Artistic Fraud/Love of Learning). More at bernistapleton.com.

Originally from Vancouver BC, Jaimie moved to Newfoundland four years ago and is now proud to call St. John’s her home. Most recently Jaimie stage managed ...float... for Choral Canada and Tosca for Opera on the Avalon. Favourite credits include: Ours for Opera on the Avalon; Offensive to Some for PerSIStence Theatre; Betroffenheit with Kidd Pivot; Chelsea Hotel: The Songs of Leonard Cohen for The Firehall Arts Centre; and All The Way Home for The Electric Company. Jaimie also recently worked at the St. John’s International Circus Festival. Jaimie is a graduate of Studio 58.

Sara Tilley’s work bridges writing, theatre, and Pochinko clown. She’s published two award-winning novels: Skin Room (Pedlar Press, 2008), and DUKE (Pedlar Press, 2015), and written/co-created twelve plays. Sara was the artistic director of the feminist theatre company She Said Yes! from 2002-2016. She teaches Pochinko clown and neutral mask, and freelances as a movement, voice, mask and character coach for actors. She loves to act, direct, design and puppeteer, and is currently working on both a solo puppet show for all ages, Hungry Little Shadow, and Heart Eyes, a poetic memoir about chronic illness. More at saratilley.ca.